A whole lot of stuff has happened since last we left our heroes – get ready for lots of exposition.

The first Trivia Night at Finnegan's Wake in Winston-Salem.

Well, we didn’t do as well in Trivia as we thought we would. On the first trivia night, Michael and I came in third with the grand score of 9. On that night we were 1/6 teams, the only ones competing as a pair instead of a group of four or more. We thought we could simply take the gold if our team was larger, but unfortunately it was not the case. 1, there were more teams competing that week, and B, adding Andy, Tiffani, and her friend Crista actually made it more difficult to decide on answers. But since when do I play to win? NEVER (read: all the time) Seriously though I play to have a good time, unless I don’t win. 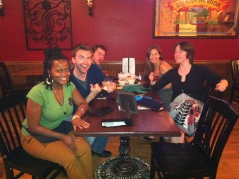 No really, but in all seriousness, though – it really was a good time. Meagan joined our group after her rehearsal in Greensboro – and when her shift was nearly over our new favorite server in the entire state of North Carolina joined us. Her name is Michelle, and watch out world – because she’s working hard and is going to be freaking fantastic.

Towards the end of the week, Andy and I were torn back towards the mountains once more and ran into a familiar face and his new tour partner in Jonesville, NC. Joe and Dan joined us for a Saint Patrick’s Day Eve Eve celebretions at a small little wine and beer bar called “Fiddle’s Pub” that was full of older gentlemen chess players that may or may all not have owned the now appropriate public house. Afterwards we all enjoyed a Double Ukulele and Melodica jam session in the pool room. And with that, we said goodbye to North Carolina. 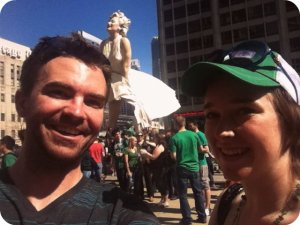 Marilyn is about to get pinched for not wearing green.

Hello, Chicago. It’s me again. I told you I would be back in the spring, now didn’t I? No, shh… don’t cry. We don’t have much time – let’s just get down and dirty.

We rolled into town in time to make the St. Patrick’s Day Parade. Andy went to carouse with newly successful grown-up Bill, and I sought out everyone’s favorite Michael. No, not Fox. No, not Bolton. No, not Jackson. Venske, people, Venske. Stay with me, kids. We caught the tail end of the parade, and explored the rest of the city. I may or may not have had an anxiety attack, my knee felt like it was gonna blow, and we had a delicious fish sandwich at a thankfully quiet lunch counter before heading back to the hustle and bustle of it all.

Even the river got the memo.

You wouldn’t believe it. There were gingers everywhere and everyone was wearing green and stumbling. I felt like I was in an episode of the Walking Dead by the end of the day. We travelled to Wrigleyville, where the sea of green was just as large but remarkably younger. One such zombie in that sea was offered a drink of water from my water bottle after stumbling into me. She poured half of it down her throat before I could tell her to take it slow. She brought the bottle back down and looked for a moment or two like she might get sick. How can being this drunk in public possibly be glamorous? I know I’m the pot calling the kettle drunk, but cha’mon mon – get it together! I can hold my own with the big leagues in Wrigley Field!

We split ways before sundown and I went to join Travis and Kristi for Commedia Beauregard‘s Bard Fiction at the Greenhouse Theatre Center. Words can’t express how funny it was. And I know it was a holiday, but they had an unreasonably small house. Take a look at the trailer, and tell me you don’t want to go see Bard Fiction! I dare you! I double dare you vile Oedipus! A spectacular cast made this show – I couldn’t believe the work I was seeing. Hope I can work on their level in the near future.

Afterwards, wine and dining at a Mexican restaurant then couch crashing with the Barnharts.

So now I’m in between a rock and a hard place. I love you, Chicago. I want to be with you. I really do. But I gotta go right now. We’ll catch up again soon, okay? I’ll hurry back. xoxo

A beautiful sunset ride through Wisconsin later and we’re in Minneapolis unloading the tour vehicle and popping champagne and hugging new friends. The people I have met during my time on tour have shaped me for the rest of my life. I’ll never forget it – truly… And I can’t help but wonder where I’m bound. But for now, I’ll take some time for friends and family at the city I will always call home, whether I live there or not – Tulsa.