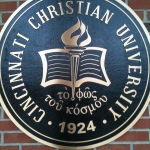 Today I took some time to visit the Cincinnati Christian University.

I can't tell you how proud this makes me.

In the 40’s, both my grandparents attended what was then called the Cincinnati Seminary. Later, in 1977, my uncle Mark graduated from the same Seminary. I have heard countless stories from the whole family about the seminary and their days there. Grandma Martha would tell me about her work in the music hall, which was having auditions while I was visiting. Grandpa Roy also had several stories about the Seminary on the hill. My own dad attended in ’67, but transferred to OU shortly after. My favorite class from his time here was a 3 credit hour class called “Christian Manhood.”

Armed with all of this knowledge, I visited the seminary to see what there was to see. I was awarded with the following sights:

The view of Cincinnati from the seminary

Roy and Martha were awarded the anchor award for their ministry. This plaque honors them both in the President’s Hall.

I sent the pictures to my Dad who was with Grandpa Roy. I hope they gave him a smile – as I know that my Grandmother has been admitted to the hospital today. I asked Rachel, the kind administrative assistant who helped me find everything, to pray for them. Walking the grounds was like walking in their footsteps. Like Grandma said when I last saw her, it was like looking in a mirror of another time.

90 years young, Grandpa and grandpa on a recent visit